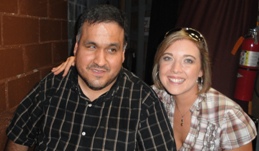 Amber Digby hails from Nashville but is an integral part of Texas Music since quite some time. Her parents and grandparents played for many different Greats of Country Music. She had appearances in Europe and Australia, her debut at the Grand Ole Opry was in 2009. On her five CDs, Amber’s offering traditional Honky Tonk Music at it’s best. 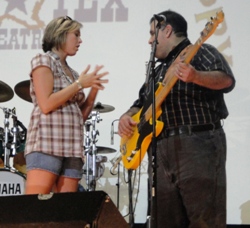 Justin Trevino, blind since birth, plays guitar since he was seven years old. At the age of thirteen, he had his first professional gig and has played with all Greats of Texas Music ever since. His ten productions are a warranty for hot uptempo songs, lyric ballads or soulful gospel music.

Their first duet album, Keeping Up Appearances, was published on Heart Of Texas Records. At the occasion of their gig in Llano, TX, I had a chance to speak with both artists. 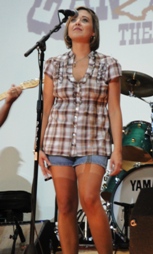 BM: You both followed different careers but have crossed path many times in the past. What made you decide for a duet album?
JT:  Our careers haven’t really been that separate for the past ten years. I engineered and produced her four albums. Even now that she hasher own band, we use to play a lot together. So we have a longstanding connection and thought from the beginning that it would be cool to do a duet album. It just took us that long to finally get around and get one done.
AD: Yes, I sung harmony on Justin’s records and he played on mine. So it was kind of a non brainer to do a duet album.

BM: That’s what I read. I just don’t see many artists that take the risk to do such an album these days. 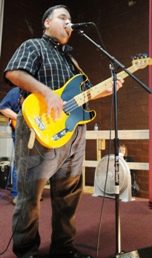 BM: To me this project resembles the days of Loretta and Conway, George and Tammy, Porter and Dolly, just to name the most significant duet partners. And it sounds a lot like those albums, too.
JT: That’s a heck of a compliment. I am glad to hear that. I felt like the record would be well received.
AD: In the major industry  they don’t do this anymore. But I think it stands for our creative freedom to do such a project, especially with someone, whose singing you like and who’s a close friend of yours. So for us it’s not a risk.

BM: You both continue the tradition of good, old Texas and Country Music. What would it take for you to change your style and become a representative of today’s mainstream Country Music?
JT: (laughs) I couldn’t and wouldn’t do it. I don’t have the vocal skills to do anything else, either. Amber on the other hand can sing anything, so she has to answer that one for herself. I just don’t think I can sing like Kenny Chesney, so I’m not gonna try.
AD: I don’t judge the mainstream stuff as a whole. There’s a lot of good music out there, too.  But the same was true for the 60’s and 70’s. There’s always been good and not so good muic. I love traditional country music, but, at the same time, I am only going to do music that inspires me, without labeling it. I truly love what I am doing now, more writing, changing, growing. So I can’t say I’m not gonna do this or that. 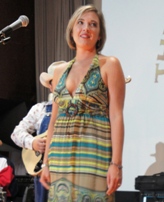 But I agree with you that there’s stuff out there that can be questioned. It’s so complex these days.
JT: It’s not black and white really. Amber has a point here. My personal favorite era of country music is from about 1958 to 1972. However, I can find you a bunch of records from that period that weren’t any better than the stuff we criticize now.

BM: You have performed with almost everyone great in the business. Is there a specific artist you still would like to share the stage with?
AD: Well, I know who mine is. Actually, I have two. One is Vince Gill. We’ve written together but we haven’t shared the stage yet. I would love to do that.
JT: This isn’t my interview to conduct but who’s your other one? 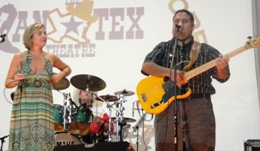 AD: George Jones…
JT: It’s hard to narrow it down for me. If I really have to pick one that I’ve never sang with ever, I have to agree with Amber that it would be George Jones. Another would be Loretta Lynn. I can’t put Vince on the list, because I once sang harmony with him, even though Amber knows him far better than I do. I also sang with Connie Smith one time and I tell you right now, one time wasn’t enough.

BM: You’re touring and performing a lot. How do manage to keep up this quite hectic life and still live your family life?
AD: My husband Randy Linley is with me in the band and manages me, but it’s definitely a joggeling act. We have kids of 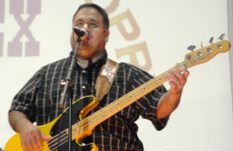 our own and I have stepkids. Burning the candle at both ends is sometimes hard to do. However, the kids are happy seeing that their parents are happy in what they’re doing. That’s very important for us. Of course they miss us and we miss them, but they understand that we want to continue as long as we can.
JT: First of all I’m gonna add Mel Tillis to my list of favorite duet partners (laughter). As far as family is concerned, my wife and I have no children and she always travels with me. So it’s never been any sort of problem. 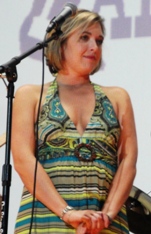 BM: If you would have to start your career in today’s music business, what would you have to do different to get the same success?
JT: I don’t know if that really applies to me. I’ve been doing this professionally for about thirteen years now and I don’t see much of a difference since when I started. So that question might be better suited for an older artist. I don’t think I would do anything different.
AD: Me neither. It’s another thing if your desire would be to become a star and you would doing everything you can to achieve this, like losing weight, dressing trendy, moving to Nashville, recording the country pop and all these things. But that doesn’t last very long. In my eyes, I already enjoy success. I’ve been singing in bands since I was fifteen and I’m approaching thirty now. For almost four years I have my own band and I’m writing with great Nashville songwriters. But I’m still doing traditional country. So I think work ethic is going to pay off.
JT: A lot of those guys are opportunists. They’ll do anything it takes without having strong convictions about the music. It’s more about being a star and all that... 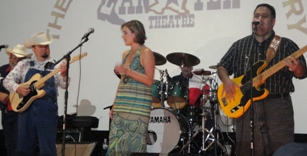 AD: ...Which takes away a lot from the true artistic soul.

BM: What comes first to your mind when writing songs, the words or the music? And what do you think helps more to make a great song?
AD: For me it’s the melody…
JT:… for me they come simultaneously, I don’t place one as being more important than the other. If you don’t have a melody but a great poem, it may not be a song. The melody has to be there, too.

BM: What was the most thrilling moment in your career?
AD: The first time I got to sing at the Grand Ole Opry, that was December 19, 2009. Not only being on the Opry but also the fact that one of my heroes, Ronnie Milsap, not only introduced me but played right beside me on stage. I’ll never forget that.
JT: It’s hard for me to pick one. There’s been a few such events. When Amber and I went to Sweden with some other artists in 2005. Realizing that those people over there were not only understanding our music, but they were familiar with it and were singing along. That was a good feeling that I’ll never forget. 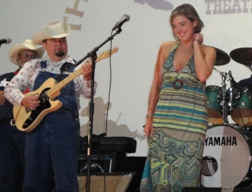 BM: Assume that you could change the world for good. What would be the first thing you’d command leaders to do.
JT: (laughs)…
AD: Wow… Maybe this sounds crazy, but because I have kids I really think Television is overdoing it these days. Kids are growing up way too fast watching all these so called shows. So I’d rather turn the TV off and go outside to play with them. There should be better regulations 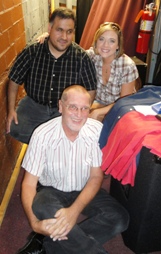 for TV as to what they show on prime time. Even they claim things to be for kids, the subject matter is way beyond a nine or ten year old.
JT: I agree 100%. When nobody controls it, it can get out of hands very quickly. It’s not realistic for parents to tell their kids not to watch TV. So there’s gotta be tighter control. We’re not prudes but there’s a time and place for everything.

BM: If it weren’t the music business, what job would you probably be in today?
AD: Photography, for me this would be it…
JT:… me too, Photograpy (laughter). Painting houses (laughter). No, seriously, I don’t know what I’d be doing. I went to become a computer programmer but I never finished that. That’s probably what I’d be doing.

BM: If you were to interview Amber and Justin, which question do you ask that I did not?
AD: Hmm…
JT:…you’ve asked questions already that I didn’t think about, so I guess you covered it pretty much.
BM: fair enough. Thanks a lot for the interview.